Syphilis symptoms may present in one of four different stages: primary, secondary, latent, and tertiary. And also congenitally. 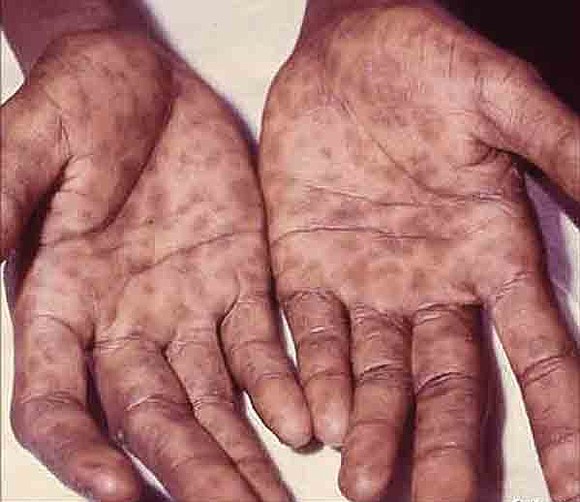 Secondary Syphilis – rashes on palms, soles, and body usually appear within three months after the initial infection, coupled with flu-like symptoms (fever, lethargy, swollen glands). Other less common symptoms include moist, fleshy growth near the groin and anus, hair loss, etc. This is the most infectious stage. If left untreated, the rashes may also disappear; once again this does not mean that the infection is cured.

It must be emphasised that not all patients demonstrate early symptoms. Furthermore many may not be aware of infections occurring in the rectum or throat, while others may ignore mild rashes and flu-like symptoms which can be mistaken for a common throat infection and viral rash. Blood tests for syphilis one to three months after exposure will be able to diagnose the infection.

Latent Syphilis – this is the period where there are no symptoms or signs, the infection is called latent. Though it is not infectious, the bacteria continue to spread in internal organs. Some infected persons with syphilis remain in this latent stage for the rest of their lives with limited complications.

Tertiary Syphilis – a proportion of infected persons progress to this late stage after five to up to 30 years where internal organs like the heart, brain, eyes, nerves, spinal cord are seriously infected. Usually these people are discovered when they present with heart problems, visual problems, psychiatric or brain complaints etc.

C. Latent Syphilis
Asymptomatic phase with no clinical signs of organ involvement. It is categorised into –

Sexual risk (of HIV/STD/pregnancy), and what you can do before and after exposure.

* Males: Do not urinate for at least 4 hours before arriving.
* Females: testing is more accurate when you are not menstruating.