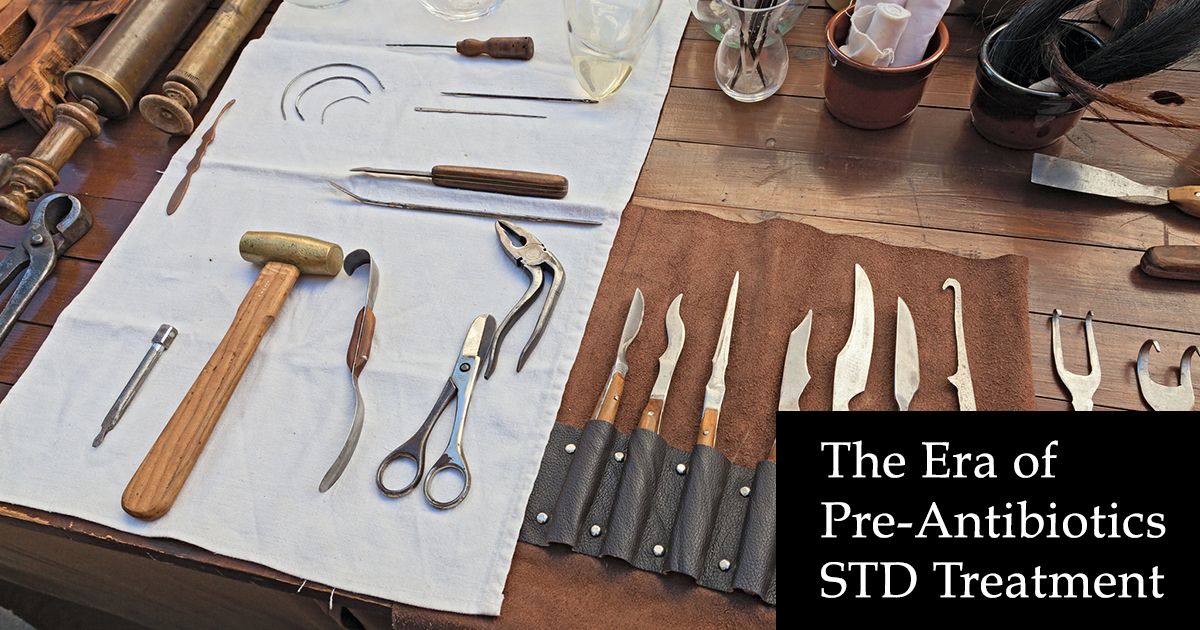 We live in troubled times, medically speaking. The antibiotics that seemed so close to conquering the world of bacterial disease are failing. There is a very real possibility of a gonococcal superbug, resistant to all forms of antibiotic. As early as 2012 Dr. Gail Bolan, director of the Division of STD Prevention at the CDC advised that “Untreatable gonorrhea is a real possibility” and this is not the only STD that is powering its way through genetic mutation to apparent invincibility.

The post-antibiotic age is fraught with uncertainty, but things could be worse. We have a scientific powerhouse to fall back on, with a solution more likely than not. But what was it like to live in pre-antibiotic times? Gonorrhea, herpes and genital warts are mentioned in historical documents going back to Ancient Egypt and Ancient Greece. There is a plethora of social and medical solutions to the sexually transmitted poxes that followed armies across the ancient world.

Have cankers or warts on the genitals? No problem for a Greek surgeon. The obvious solution is to cut them off. Anaesthetic? Not really but here is some hemlock that might dull the pain, possibly permanently.

Herpes on the rise in your city? A ban on kissing is an easy, if unpopular, solution. Even less popular I suspect was the cure for  lesions. Application of a red-hot poker will solve that problem.

The clap cutting a swath through the population? The English have the solution. Yes, youth clubs for the peasantry. Get the young men out rowing, bell ringing, playing at archery or learning to swim is sure to “distract them from moral carelessness.” Should you be unfortunate enough to contract it, a urinary blockage is easily cleared by insertion of a metal catheter into the urethra. Syphilis introduced by sailors from the new world was so feared that the French King banished suffers from the city. King Henry VIII of England ordered an immediate, and as it turned out temporary, closure of brothels in London and a ban on mixed-sex bathing. But a cure was on its way, fresh from the Islamic scholars. The miraculous cure of mercury injected into the infected urethra or vagina. Sure to prevent the progression to tertiary syphilis with its accompanying lesions and madness (side effects may cause lesions and madness). If mercury failed, why not add lead to the heavy metal treatment with a lead infusion in almond oil? If the problem persists, bloodletting was commonly used as well as arsenic, more mercury (ingested this time), and when all else fails, a prayer to the god(s) will most definitely work (most effective when combined with a generous donation to your local monastery).

Can’t perform in the bedroom? No Viagra as yet, but why not try the new craze on the block. Yes, it is the early 1800s and a new age has dawned. Lightning has been tamed and for a one-time special offer you can purchase an electrifying belt, sure to give you a jolt in just the right place. Warning: electrification may result in burns or death (no refund).

Mercury injection was a common treatment for syphilis up until the late 1800s despite its hideous side effects, in the absence of a better treatment. It was gradually replaced by silver nitrate, potassium iodine and into the 1900s with the sulphonamides and penicillin in 1943.

So not matter the outcome of any test. No matter the tedious instructions to take with food, or before eating, after eating, at night, one 5th of a tablet five times a day, the threat of an intramuscular injection or even a suppository. Give a small prayer of thanks that you will never see the words injection of mercury solution or application of heated iron on the doctor’s prescription pad.