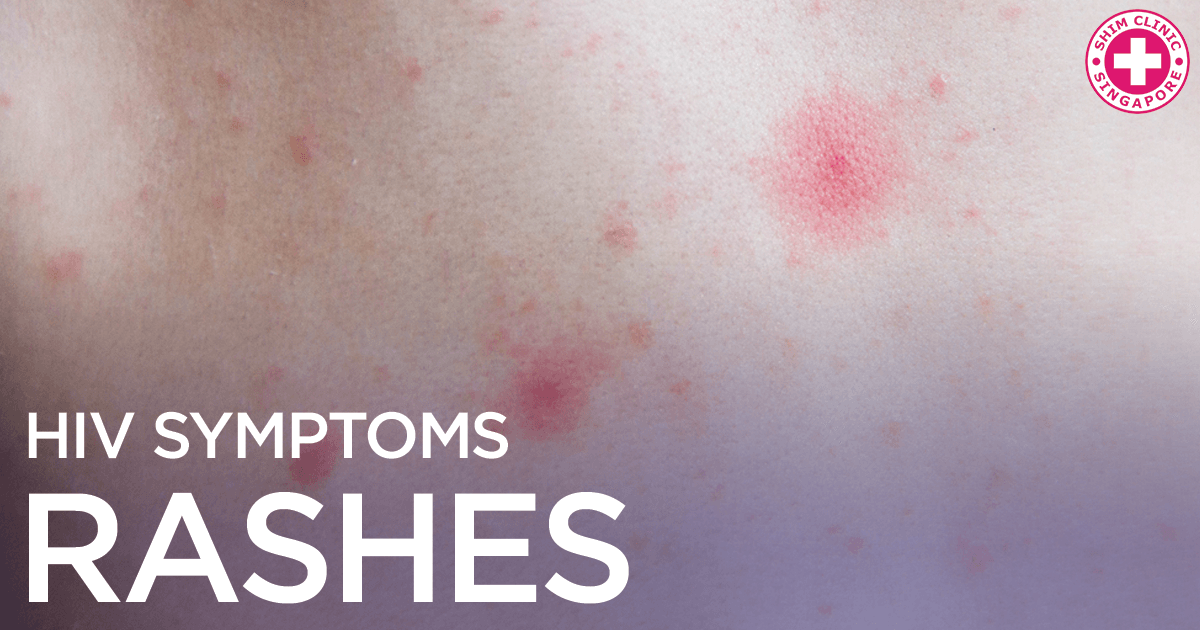 A rash is a possible symptom of an acute HIV infection. The rash consists of many small spots, flat or slightly raised, present on the torso, face, palms of the hands, and sometimes other parts of the body. This rash is typically not itchy. To find out whether it’s due to HIV, you need an HIV test.

A rash is a possible symptom of an acute HIV infection. Also known as primary HIV infection or seroconversion illness, these are the symptoms that occur when someone first acquires HIV. The symptoms don’t begin right away, but instead start 2 to 4 weeks after the exposure to HIV occurred. They can then last for up to a few weeks. After they resolve, the HIV infection will not be gone. The virus will remain inside of the body, but will cause no more symptoms for years, until it has damaged the immune system significantly.

The skin rash associated with acute HIV infection usually consists of many small spots, which can be flat or slightly raised. On lighter skin, they appear pink or red, while on darker skin, they may look purple or black. The rash typically appears on the torso (including the chest, abdomen, and back) and on the face, and may also affect the palms of the hands. It can appear on other parts of the body. This skin rash is typically not itchy.

There are many other possible causes of a rash. Many common viral infections can cause a similar rash. Conditions like eczema and psoriasis can also cause skin rashes, although these are typically itchy, unlike the HIV rash. Even cancers like leukemia can cause a skin rash. It’s difficult to tell that the rash is actually one of your HIV symptoms just from looking at the rash, so your doctor needs to do an HIV test to know that it’s due to acute HIV infection.

Although the rash and other HIV symptoms don’t appear for 2 to 4 weeks after you’re exposed, it’s best to go to an STD clinic sooner than that, if you have a known or suspected exposure to HIV. There is a medication regimen called HIV PEP that decreases the risk of getting HIV from the exposure. However, HIV PEP loses effectiveness with every hour you wait to start it, and it’s completely ineffective if started more than 72 hours (3 days) after you’re exposed to HIV. If you wait until you have a rash and other HIV symptoms, it will be too late. Visit an STD clinic as soon as possible if a condom breaks or leaks or if you have another exposure to HIV, so you can discuss whether you’re a candidate for HIV PEP. You’ll also get an HIV test and any other STD testing you may need.

Sexual risk (of HIV/STD/pregnancy), and what you can do before and after exposure.

* Males: Do not urinate for at least 4 hours before arriving.
* Females: testing is more accurate when you are not menstruating.